We let our cat make this announcement on 1st April: 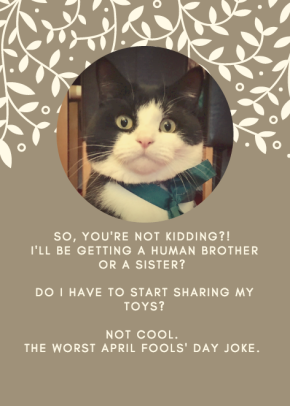 I’m certain a number of people didn’t know how to react to this and genuinely believed it was a joke. Well, the joke’s on us when our sleepless nights commence in September…

With all the recent announcements I also decided to start wearing the infamous ‘I must have your seat’ badge – ‘Baby on board’. I’m now 20+ weeks pregnant and only showing a little bump, which almost goes unnoticed with my coat on. Nevertheless, I thought it was time to start testing fellow commuters whether this badge would protect me from being pushed and shoved around in busy carriages (I do take one of the worst commutes in London – the Central line). I’m still perfectly fine standing (although I do get dizzy sometimes), don’t suffer from sickness (just a mild nausea), and don’t necessarily need a seat every time, especially if it’s covered in crap. But I’m curious to find out if I get treated differently, I don’t demand priority, just kindness and consideration, especially as I grow bigger and get more uncomfortable. Then I’ll probably be begging for a seat…

I’ll report back on my stories when I get there.

So far it’s been very positive, I don’t even mind the odd inquisitive stare at my belly. If you wear the badge get used to the attention! Both, women and men, have either offered their seat, asked if I were comfortable standing, if I had enough space, or just kindly let me on or off the carriage first.

I did some googling before writing this post and was shocked to read how a woman was asked for a proof of pregnancy for wearing the badge. Like, seriously… Or these disgusting responses. I really hope I get none of that! Yes, it was my choice to get pregnant but if someone’s choice is to act like an ignorant rude a..e then I’m already winning.

Fellow London mums, what has your experience been as a pregnant woman wearing it early on in your pregnancy and how was it later when you were obviously pregnant-looking?

A lifestyle blogger and a holistic sleep coach who's recently moved back to Estonia after 16 years spent abroad - seven in Ireland and nine in England (London). View all posts by Livia

4 thoughts on “We let the cat out of the bag”

1.5-year old Lion King 🦁 👑 .
Haapsalu, my hometown, is amazing in the summer. Cannot wait to go back.
Accepting an award for keeping the kiddos alive, fed, entertained and just generally well looked after and loved by myself alone in my lonesome while husband was away on a business trip.
London, you’ve been amazing.
With my London baby. I’m beyond excited to be back and welcome the new year from here. We’ll be visiting some of our old stomping grounds and reminisce on London-life pre-kids. But also take M&M around and see if anything is familiar to her… she was two when we moved.